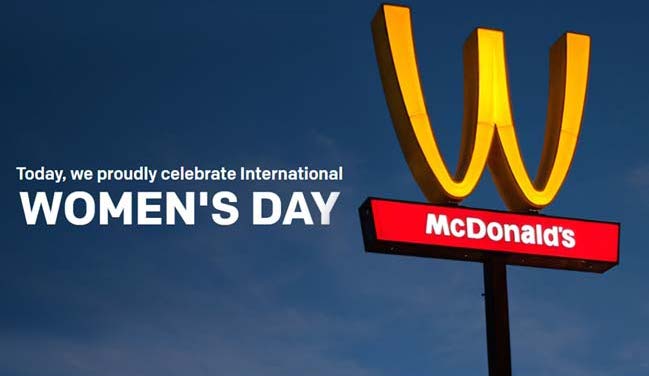 This week at Brand Genetics we’ve been reading all about International Women’s Day. A few unorthodox insights have caught our eye…

This month is Women’s History Month, and this past week was host to International Women’s Day (IWD). In celebration, several big brands – including Barbie, McDonalds, and top alcohol brands like BrewDog and Johnnie Walker –  have launched themed campaigns in an attempt to honour the cause and raise awareness for female empowerment. While some were perceived as genuine, the majority were criticized as shallow and out of touch.

The beginning of the week saw BrewDog launch “beer for girls”, a pink IPA aimed at raising awareness for the gender pay gap and the persistent predominance of sexism in advertising. In addition to its overtly pink and ‘feminine’ branding, the beer is being sold at a fifth of its usual price to reflect the UK’s gender pay gap. Although proceeds from its four weeks of sales in the UK will go to the Women’s Engineering Society, many felt ‘beer for girls’ was little more than a cynical marketing campaign, with several critics taking to Twitter to voice their concerns. Others felt that while BrewDog’s intentions may have been pure, the execution resulted in confusion and anger due to its perceived sexist undertones – sarcastic or not. In a similar move, Johnnie Walker released Jane Walker, replacing it’s iconic logo with a woman with the aim of highlighting the origins of the brand (prior to its purchase by John Walker, the distillery was run by Elizabeth Cumming).  Once again, many took to Twitter with sarcasm and vitriol, expressing their animosity towards what they saw as a “patronizing” move. A prime example (and personal favourite) was one woman who remarked: “Scotch is so intimidating, just like math! Thank goodness someone is finally making scotch just for ladies!”.

Fast food giant McDonald’s also partook in the festivities, “flipping it’s arches” upside down, transforming its iconic M to a W in celebration of the day. At the corporate level, McDonald’s overturned its logo on all social media channels and supplied 100 restaurants in the US with specially branded merchandise. At the local level, one of its Californian restaurant’s even installed a brand new sign. While the fast food giant proudly proclaimed their support of women “everywhere and especially in our restaurants”, many people felt it was a cheap attempt, calling out McDonald’s on its hypocritical treatment of employees’ wages. In an interview with the Guardian, Laura Parker explained, “if they actually cared about women they’d pay their workers a living wage and stop forcing them onto zero hours contracts”.

Lastly, we saw Mattel release a series a “Shereo” Barbie dolls, designed to give girls a range of positive role models. Based on influential women like artist Frida Kahlo and American fencer Ibtihaj Muhammad, the first hijab-wearing Barbie, the dolls are meant to offer young girls more diverse roles and physiques to identify with. However, while laudable in theory, the dolls have received backlash for what many see as a reduction of these female icons to superficial stereotypes. Many believe that by presenting young girls with “the disturbing proportions and unrealistic features of the original Barbie’ rather than each woman’s iconic features – for example Kahlo’s unibrow, strong muscles and body hair – Barbie has stripped these icons of their empowering features. They feel slighted and angry. As Bibi Kang writes in this comment piece;

“If we take away their muscles, their body hair, their natural proportions and their voices, then we have what is essentially a sanitised version of the women who present the most palpable challenge to the patriarchy.”

The Human Experience (HX ) Learnings? Although these campaigns are paved with positive intentions, this backlash illustrates just how sensitive women’s issues are. The public are increasingly sceptical of brands piggy-backing onto causes, increasingly demanding transparency and honesty. As gender equality and women’s issues rise on cultural agendas, it is fundamental that brands are mindful of these issues, avoiding tokenism and instead aiming to support, facilitate and empower in totality.