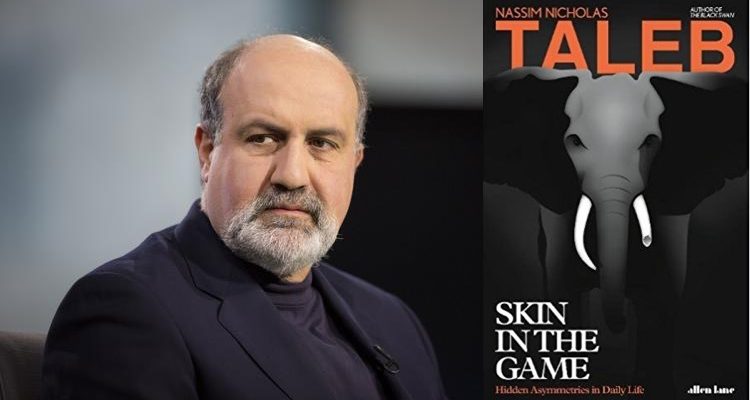 Nassim Nicholas Taleb poses the question: “You have the choice of 2 different brain surgeons.  One looks and dresses like a butcher, and the other is a suited and booted Harvard professor.  Which one do you choose?”  Most people of course opt for the latter, but Taleb himself wouldn’t.  “If you look like a butcher, you’ve got to be a damn good brain surgeon!”

Such unconventional thinking lies at the heart of Taleb’s bestselling book, The Black Swan.  So it was inspiring to hear him talk in person about his new book, Skin in the Game, at Second Home in Spitalfields last week.  Skin in the Game is about risk taking and the importance of having accountability for the decisions you make.  This, Taleb argues, is how society was built – on the basis of risk sharing.  So he can’t abide those who don’t have accountability for their own actions.

As a self-styled bullshit buster, Taleb loves a good rant – and he certainly gave one.   Cue a string of Taleb targets.  Former US treasury secretary, Robert Rubin – because he worked for Goldman Sachs and the government, “both the things I hate most”.  All CEO’s – because “they’re all actors, who look the same”.  Economic forecasters and policy makers – because anything reviewed by peers or experts “rots”; reviews should be done by those with skin in the game.

We also agree with Taleb about the power of start-ups and entrepreneurship, with not just skin but also “soul” in the game.  He argues compellingly that commitment is king, and people should practise deeds not words.  Also, that you should never look at what people say, but at what they do.

Taleb will challenge any conventional thinking, which is highly refreshing – and it’s hard not to concur with his concluding mantra, that “things are only interesting if they’re not obvious”.