Can you tap into the growth of ‘YUMMY’ money? 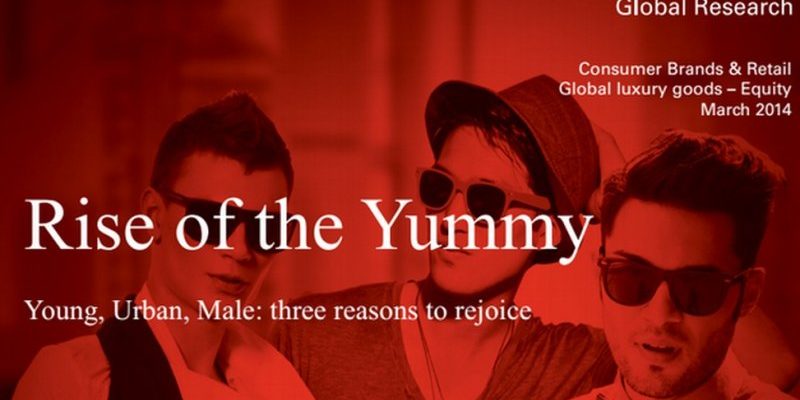 The world is going crazy for the latest neologism – the YUMMY (Young, Urban Males). This new (frankly horrible) term, coined by HSBC analysts in a recent report, disguises a fascinating trend: the potential of this new, more mainstream version of the ‘metro-sexual’  to reshape the $1 trillion luxury market landscape.

Global luxury sales look set grow between 8 – 9% this year, more than expected and helped in large part by the rise of young luxe-hungry males. This ‘Menaissance’ (they don’t get any better do they!) has been happening for a little while now: male plastic surgery in the UK went up by 16% in 2012 and fashion brands like Tom Ford and Marc Jacobs both launched make-up ranges for men last year. And as the report details, the rise of the YUMMY is especially prominent in Asia – starting first in Japan, followed closely by Korea and spreading fast: for example, whilst globally men only account for 40% of luxury sales, in China they account for 55%.

So what has changed? HSBC suggests the rise in young men purchasing luxury goods for themselves is driven by a rise in ‘status-consciousness’:

“Although it may sound quite counter-intuitive, luxury goods consumers are in fact relatively young. And they are getting younger. This is driven by psychological and social trends whereby consumers prefer to display social status earlier on (while older, better-off consumers may have less to prove and will tend to buy for themselves rather than to impress others). In addition, with increasing wealth creation and affordability of travel, as well as online blogs and forums, information on brands is more readily accessible to target audiences than ever before.”

All well and good, but why does this change affect men in particular? Three reasons are outlined:

For brands – luxury or otherwise – the rise of the YUMMY is a clear signal that what it means to be a ‘man’ in today’s society is being redefined. Men who look after themselves and care about their appearance are becoming the majority – rather than a niche – in major cities round the world. Brands and companies – luxury and otherwise – that cater to this shift in attitudes and habits will prosper: for example, Burberry is developing ‘travel tailoring’ – suits which can withstand the rigors of a long-haul flight and a few nights on the town but still look great.

But successful innovation will rest on a clear understanding of this target’s value-set. At Brand Genetics we believe men will still want to differentiate themselves from the opposite sex: so the secret to success will be finding something that blends a masculinity with a new found desire to ‘peacock’. Think of the recent trend towards beards and tattoos – both are clear signals that a man cares about how he looks, but equally express a palpable manliness, even harking back to a time when ‘men were men’.

And if we can leave you with one more tip… never… ever… call a man a YUMMY to his face.