Freakonomics: A Rogue Economist Explores the Hidden Side of Everything [Speed Summary]

Before summarising the latest 2014 instalment of the massively popular Freakonomics franchise ‘Think Like a Freak’, here’s a speed summary of the best-selling original Freakonomics published back in 2005.

Freakonomics is a book about ‘freaky’ research and insight. Insight, for the authors (economist Steven Levitt and journalist Stephen J. Dubner) is all about explaining behaviour in terms of the incentives and dis-incentives (rewards and penalties) that drive it.  Sometimes incentives will be obvious, but often they will be hidden – and will need research sleuthing to uncover and map them.

The promise is that when we understand the incentives at play, we can influence and change behaviour with products, services and initiatives that disrupt existing incentive schemes.

So what exactly are these incentives? From an economic perspective, incentives are the material rewards and penalties received or promised for behaving in a certain way (hence the label ‘behavioural economics’).  But incentives are not just economic in nature – incentives come in three flavours:

From a Freakonomics perspective, insight is all about understanding these incentives, and explaining ‘freaky’ (weird, unexplained) behaviour in terms of them.  For example, incentives can explain the freaky behaviour of Sumo wrestlers in must-win league matches (where losing means demotion). They win 80% of the time!  This is partly because of the self-evident economic and social disincentives associated with demotion (they fight harder), but it’s also because of a moral incentive on the part of the fighter’s adversary not to force a demotion on a fellow wrestler (from a tight knit community).  Understand the incentives at play, and you understand the behaviour.

Freakonomics provides a practical approach to hunting for and uncovering insights. Hunt for insights where normality, received wisdom or expectations are disrupted, and then map the incentive structure for the behaviour.  Therein lies not only insight, but opportunity to change behaviour.

In terms of mapping incentives, Freakonomics provides us with a useful six-box incentive matrix for uncovering insights and opportunities (and that goes beyond the hackneyed, clichéd and ultimately vacuous false dichotomy of ’emotional’ / ‘functional’ factors). 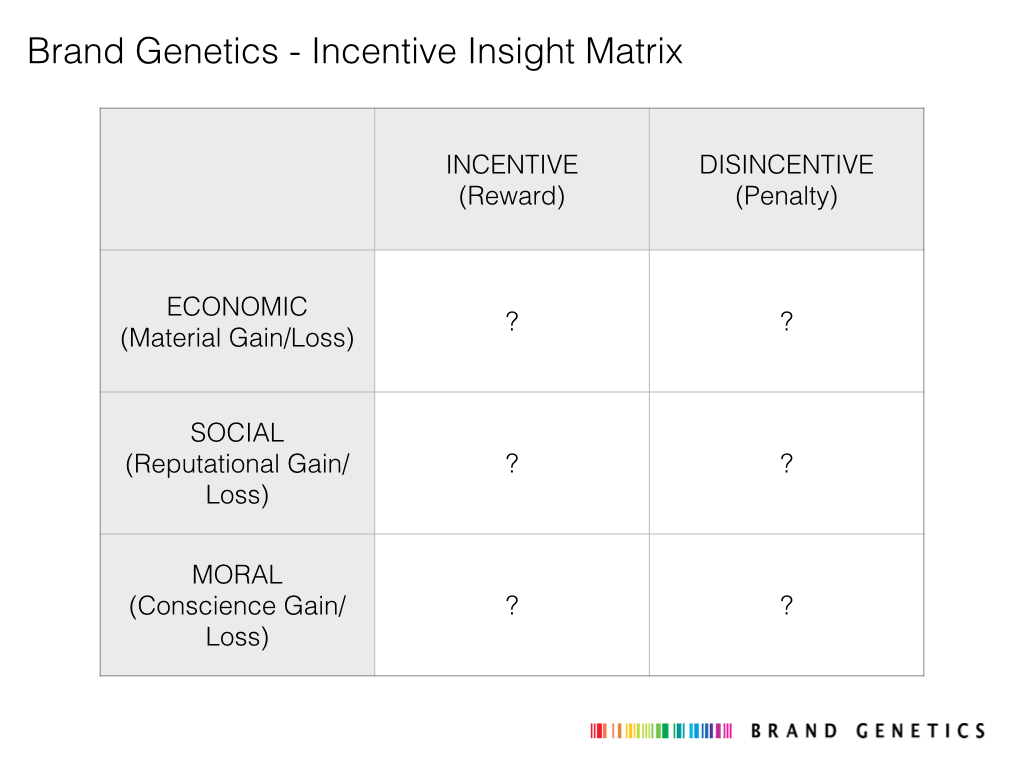