The Secret to Successful Innovation

Want to know the secret to successful innovation? Simple. You need to create innovations that are designed to be chosen. That’s the deceptively simple premise of Nudge: Improving Decisions About Health, Wealth and Happiness by Richard H. Thaler and Cass R. Sunstein.

Nudge argues that in order to innovate in today’s cluttered world of consumer-empowered choice, you need to carve your innovation at the psychological joints of human decision making. In other words, you need to become a “choice architect”.

The basic idea is that the success of innovations shouldn’t rely on changing peoples’ perceptions – trying to change what people think – whether by force (coercion) or argument (persuasion) – is costly and rarely successful. Instead innovations should gently nudge people by influencing what people think about. Nudging is about prompting people to think, often in new and different ways, in order to elicit a desired response.

The Fly in the Urinal

For example, manufacturers have been able to innovate cleaner urinals for public conveniences – not through technological wizardry, but by simply printing a life-size image of a fly onto the porcelain. The natural urge is to aim (and drown the fly) – and the result is less splash – 80% less splash.  You’ve just been nudged by a fly. 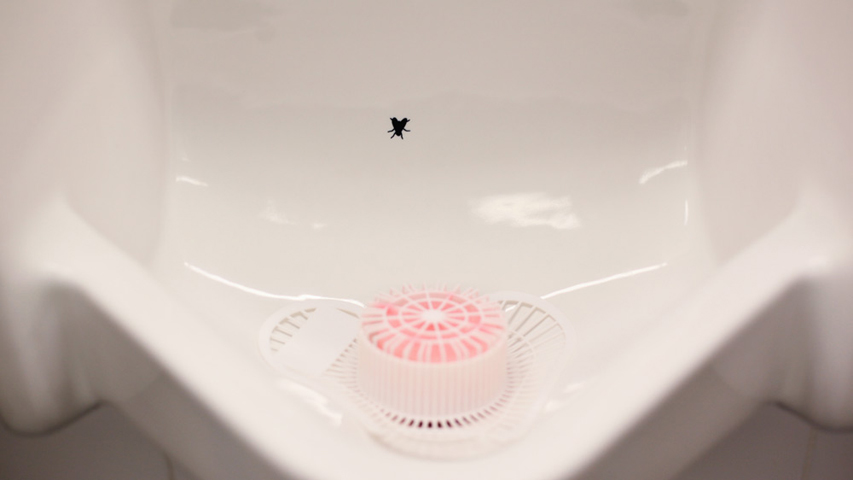 As the book’s subtitle would suggest, Nudge is more concerned with policy innovation than product innovation, but the same basic principles outlined in Nudge can be applied to new product and service design. First and foremost, design your innovation in a way that makes it the easy, natural choice.

Innovate for the Lazy

The overriding insight from choice architecture is that people are universally and naturally lazy in both thought and deed; faced with two options, we’ll choose the path of least resistance.

For innovators, this insight is key – we should be designing for the “lazy consumer” – successful innovations are those that make peoples lives easier and more convenient. Unfortunately, there’s a snag; the path of least resistance for the lazy consumer is usually for them to continue doing – thoughtlessly and mindlessly – what they’ve always been doing, and not try something new.

Fortunately, insights from the architecture of choice reveal two opportunities for the innovator based on basic psychology and the fact that people have two distinctive thinking styles that they flip between;

How to Change the World

How does this insight into the dual process nature of thinking help us innovate better? Nudge outlines two opportunities:

What these policy innovation examples share is that they don’t require coercion or persuasion – the use of force or argument, but instead they rely on nudging people to do something new by presenting what’s new as the natural, least-effortful choice.

For the remainder of the book, Nudge provides a quick crash course in the architecture of choice, focusing on some of the key exploitable biases and fallacies in how we choose, when we’re in lazy, automatic thinking mode:

The opportunity for innovators – whether policy or product innovators – is to appeal to these automatic lazy thinking biases by hardwiring features into innovations thatl nudge people into adopting them. That is the key to irresistible innovation.

Although Nudge is mostly about policy innovation, rather than product or service innovation, it is a useful reminder that any consumer-focused innovation project should begin with understanding how consumers choose. We may not be quite ready to rebrand ourselves “choice architects” – but we’re certainly thinking more about how people choose when innovating with clients.

We liked Nudge because it is less dense than Thinking, Fast and Slow or Predictably Irrational, and more readily applicable to innovation than Gladwell’s Blink. However, in our view it doesn’t quite match Cialdini’s classic Influence. All these books expand on essentially the same core insight – that thinking and choosing are “dual process” phenomena – slow, deliberative and considered vs. quick, instinctive and impulsive (and error-prone). You pays your money and you takes your choices (pun intended).

Where some of us haven’t been nudged by Nudge, is to embrace the “libertarian paternalism” that the book advocates and that is worn proudly on the authors’ sleeves. They want to save us from ourselves – but do we want to be saved? But for those who subscribe to BBC’s Lord Reith’s view that the true goal of innovation [at the BBC at least] should be to give the public something slightly better than they think they want, then Nudge will sit well with their political weltanschauung. If you’re in the business of nudging the masses into doing what’s best for them, or for those in power, then Nudge is for you.