Trade-off: Why Some Things Catch On, and Others Don’t

Will your new brand or product catch on? It all depends on whether you’re a ‘high-fidelity’ brand or a ‘convenience; brand. You can be either, and indeed should be one or the other, but not both. That’s the central message of this business bestseller on the role of technology in branding and innovation from business writer, Kevin Maney, The Trade-Off.

The theory is simple – in our accelerated experiential economy, consumers perceive and make choices in terms of two key dimensions – experience and convenience. Decisions are made through simple trade-off between fidelity (the quality of experience) and convenience (the ease of getting and paying for a product). Rock-concerts are not convenient (they take time, effort and money to get to), but they offer a high fidelity experience. MP3’s compress and remove 95% of a sound wave, offering a low-fi experience, but are very convenient. The world today is carved at the joints of fidelity and convenience – and choice involves a trade-off between the two. It’s called the fidelity-swap. Ignore it, the book says, at your peril.

Maney’s trade-off theory is not academic, but based on a number of conversations with business leaders, including Apple’s Steve Jobs, Intel’s Andy Grove and AOL’s Ted Leonsis. During these conversations, Maney was struck with how successful business leaders tend to carve up markets and opportunities in terms of convenience and fidelity.

Which led Maney to propose that the secret to successful brand innovation is to own the high ground in either fidelity or convenience. Just as Apple has gone the high-fidelity route, offering gold-standard quality experiences (ones that makes you smile), and Walmart has built an empire on convenience, you should do the same. The simple answer to why some things catch on and others don’t is that the things that catch on are built on a value proposition of fidelity or convenience.

Where it all goes wrong, and why some things don’t catch on, is when brands seek to mix convenience with fidelity, or fail to offer the gold-standard in either. Think high-fidelity luxury brands that become too ‘convenient’, say by opening too many retail outlets, and dropping prices with factory stores (Coach). Or Tiffany’s, which had a brand-eroding brush with disaster in the 1990s by becoming too convenient with $110 silver bracelet charms for all. Mass is about convenience, luxury is about fidelity. And the two don’t mix – mass luxury is an oxymoron.

If fidelity and convenience are the key drivers of what catches on, Maney suggests that theses two concepts are worthy of exploration. The concept of brand fidelity – often the experiential and sensorial aspects of a brand that make it loved – can be broken down, he suggests, into three components – experience, aura and identity:

Convenience, according to Maney, is ultimately about ease of access – not just in time, but effort and money.

Maney suggests that these insights can help manage brands to success, including your own personal brand. Most people want to position themselves in the high fidelity space – offering a gold-standard experience (in personal or professional life). But this can lead to an runaway arms race, in which it becomes ever-more difficult to compete. Smart personal branding can involve owning the alternative convenience space; making yourself available and accessible can often trump being the best.

Within this opportunity lies one further opportunity, at that is to add a social dimension to the brand experience – ‘social fidelity’ or ‘social convenience’. Social technology is a ‘social accelerant’ that can speed up how your brand catches on, and provide your brand with discrete innovation opportunities. For example, combining convenient low-fi gaming on mobile handsets with social networks has turbo-charged the category

However, there are threats too – competitors can use technology to leapfrog your gold-standard position in fidelity or convenience, demoting you to fat “fidelity belly”- offering neither gold standard fidelity or gold-standard convenience. It’s in this fidelity belly that brands get lost, and fail to catch on. Worse, new competitor technology can become a disruptive game-changer, creating ‘wrecking-ball’ moments – such as when digital cameras destroyed the film-camera market. Film-fidelity and film-convenience was usurped by digital-camera fidelity and convenience. 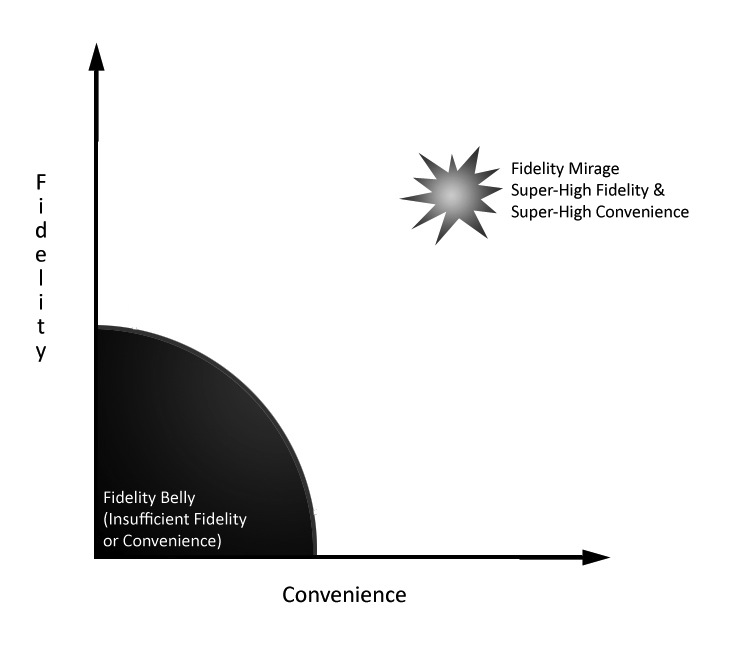 In addition to dealing with the risk that competitor technology demotes you to the fat fidelity bell or creates game-changing wrecking-ball moments, brands should be wary of falling for the ‘fidelity mirage’ – thinking that they can offer both gold-standard fidelity and gold-standard convenience. Whilst intuitively appealing, no brand has been successful at positioning itself simultaneously in these two territories, You’re either all about fidelity or all about convenience. Not both.

In sum, the trade-off theory suggest that brand managers need to ask a central question – are we on a clear path towards positioning ourselves in either convenience or fidelity? And Maney provides some simple guidelines for success